Congratulations to Tom Collins pub on Cecil Street for winning our monthly Tidy Towns Award for October. The bar manager Celine Vallely is pictured being presented with the award by Maura in their outside seating/smoking area in the alley off Catherine Street at the rear of their premises. 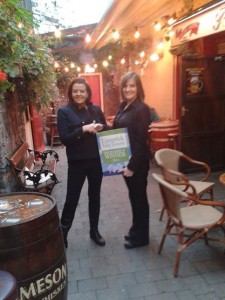 Tom Collins is obviously already well known as being one of Limerick’s oldest most iconic pubs, and its wonderfully charming interior is enhanced by an eye-catching outside area with beautiful flower arrangements and varnished beer barrels. From a Tidy Towns perspective it has transformed a city alleyway into a hugely attractive feature and shown just what can be achieved when alleyways are used to their full potential. The frontage of the pub on Cecil Street is also always immaculately kept and its vibrant paintwork and flower arrangements make it bright and welcoming and perfectly in keeping with Tom Collins’ already well established reputation for the quality of its pint!

Tom Collins is the tenth monthly winner of the Limerick Tidy Towns award, with winners so far for 2014 being Lucky Lane for January, Chicken Hut for February, Frances Twomey & Co Solicitors for March, The Copper Room for April, St Joseph’s Church grounds in May, Hook & Ladder in June, Cellar Door in July, Fergusons in August and C O’Neills Fruit & Veg shop in September. An overall winner will be chosen from the twelve monthly winners at the end of the year. To be in with a chance to win, businesses or private individuals simply need to make a special effort to improve the city’s appearance, starting with their own.