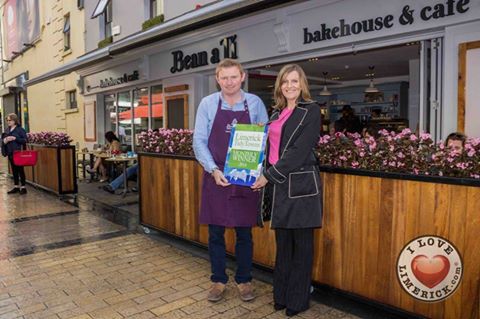 We have had numerous members of the public and visitors to the city contacting us to praise Bean a Ti’s beautiful new frontage and outside seating area since it was completed in July this year, and given that 2016 is also the business’s 50th anniversary it was only fitting that we should acknowledge all the hard work that has gone into it. The traditional signage has been retained but the new frontage has transformed the unit, with bright contemporary paintwork and modern French windows which open up the shop to the new outside seating area enclosed by solid wood panels, giving an almost continental feel to the café, while still retaining its traditional character. This has also fed through to the rest of Little Catherine Street, which is fast becoming one of Limerick’s prettiest pedestrianised streets with high footfall and a lovely welcoming buzz, particularly when the sun shines.

Bean a Ti Bakery and Café is a family run business led by Alan and John Canty. It first opened its doors in 1966 and since then has become a stalwart amongst Limerick’s businesses, renowned for the quality of its baking. The always friendly staff take great pride in producing fresh quality breads, confectionery and novelty cakes for all special occasions. In time-honoured tradition, their highly skilled bakers work through the night to provide fresh baked produce every day for sale in the café and to their wholesalers. For more information, you can call them on 061 315372, visit their Facebook page, or simply drop in for a coffee and a cake!

Bean a Ti is the ninth Limerick Tidy Towns monthly award winner for 2016, following Silverwood Jewellers in January, Rebecca Leahy Opticians in February, M&C Property in March, Ryans Jewellers in April, The Cauldron Bar in May, the Tritonville private garden in June, Salon 35 in July and Professional Nails in August. All monthly winners for 2016 will be in with the chance of winning this year’s overall prize at our next annual event to be held early in 2017.

Limerick Tidy Towns would like to thank Cian Reinhardt of I Love Limerick for taking the photographs for this and all of our monthly awards.